Are there any Easter colours beneath surface in our Nordic waters??

With this plumose anemone (Metridium senile)
I wish you all a wonderful and Happy Easter! 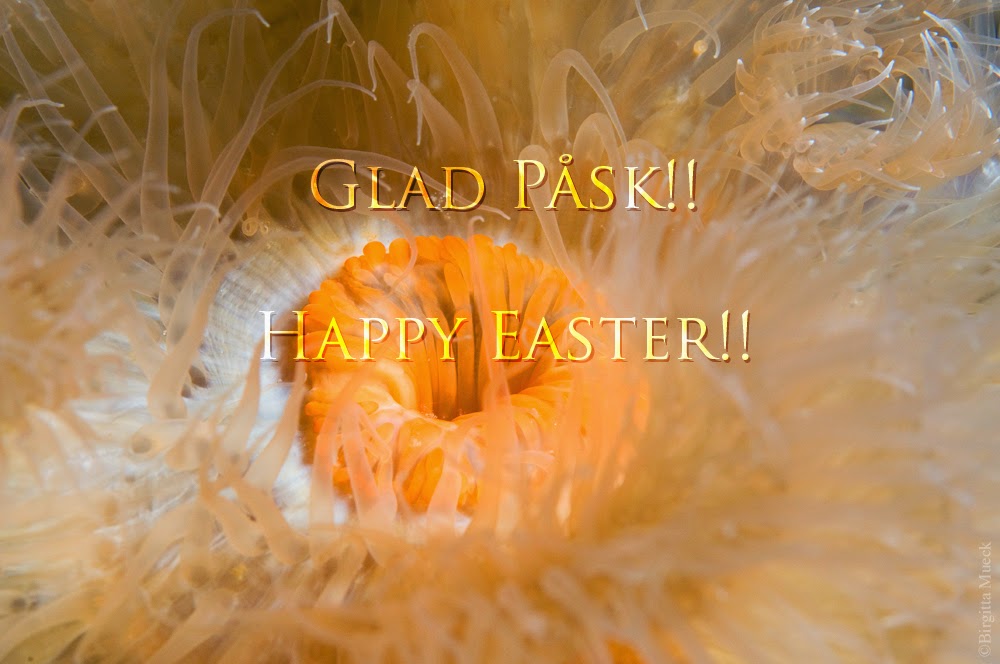 .
More colourful beauty from the Swedish west coast
in the next blogpost.

As I mentioned in my last post, it is here in Trondheimsfjord where the world's shallowest cold-water coral reef  known is located. And this is why we are here, to get more footage of this unique coral reef, this time for our new film project about marine reserves.

We've been diving on the reef many times before but that was long time ago, almost 6 years since last time!

I feel strong excitement to be back and dive at the reef again. The dive equipment is already in the boat and soon thereafter we are on our way to the dive spot. 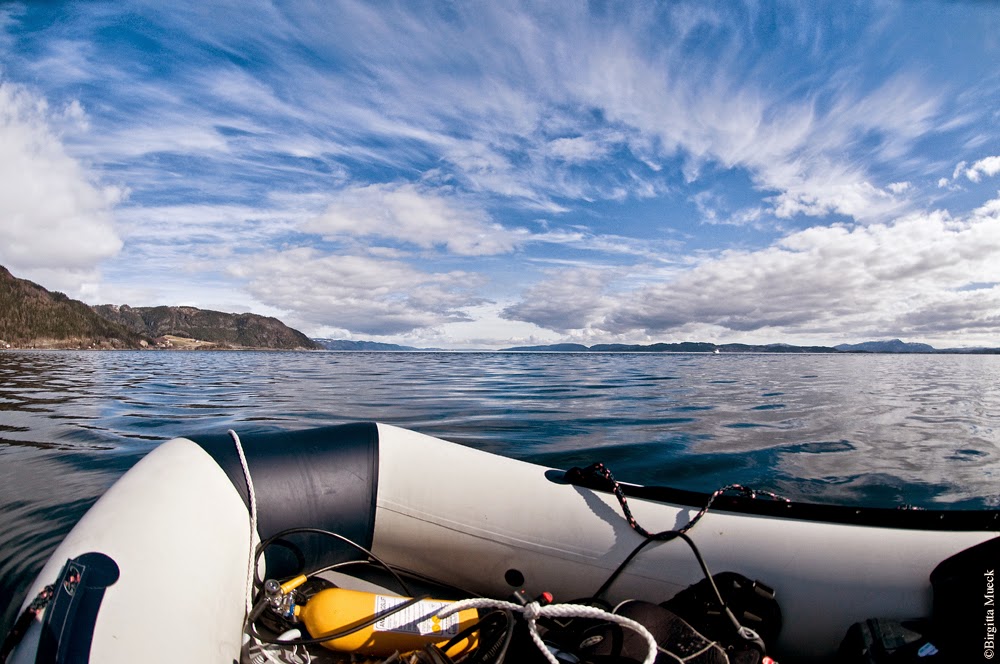 The name of this reef building coral species is Lophelia pertusa. Lophelia pertusa is a deep-water coral which normally lives at depths between  100-1000 meters. However, Lophelia reefs are often found at much greater depths, sometimes ats deep as 3000 meters or even more...

In year 2000, the local diving club "Leksviks dykkeklubb" found a reef at approx 40 meters depth. From then, this is the shallowest cold-water coral reef known in the world.

Although 40 meters is shallow for deep-water corals, it still remains deep for us humans...

To dive on this reef, you need to make a free descent in open water down to 40 meters. The location normally has a strong current, and therfore you need to carefully plan your dives according to the tide table.

This is a dive site only recommended for experienced divers. 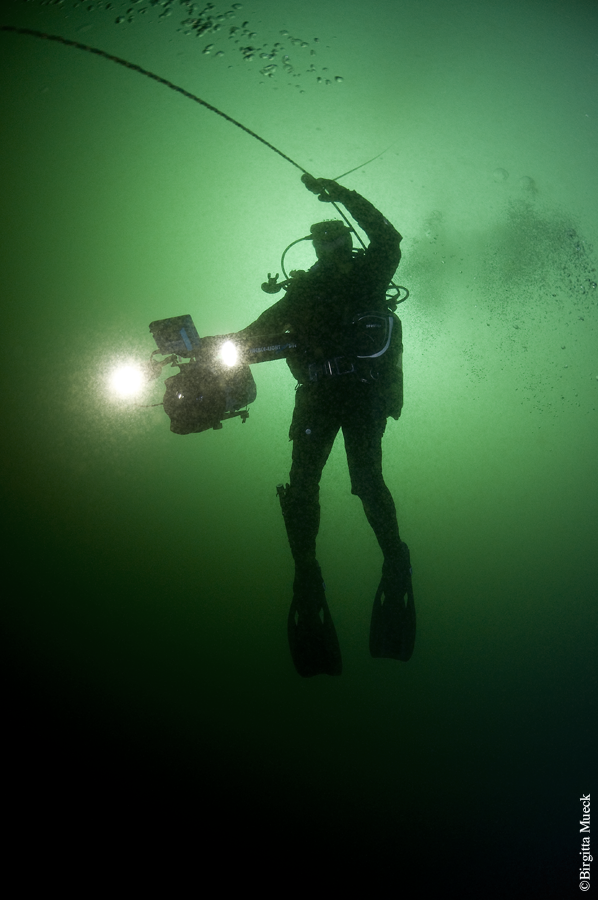 This time, we dive at high tide and reach the top of the reef first at 41 meters (39 meters at low tide).

It is really dark at the depth. Even not the slightest ray from the strong sunshine above is able to reach us down here... 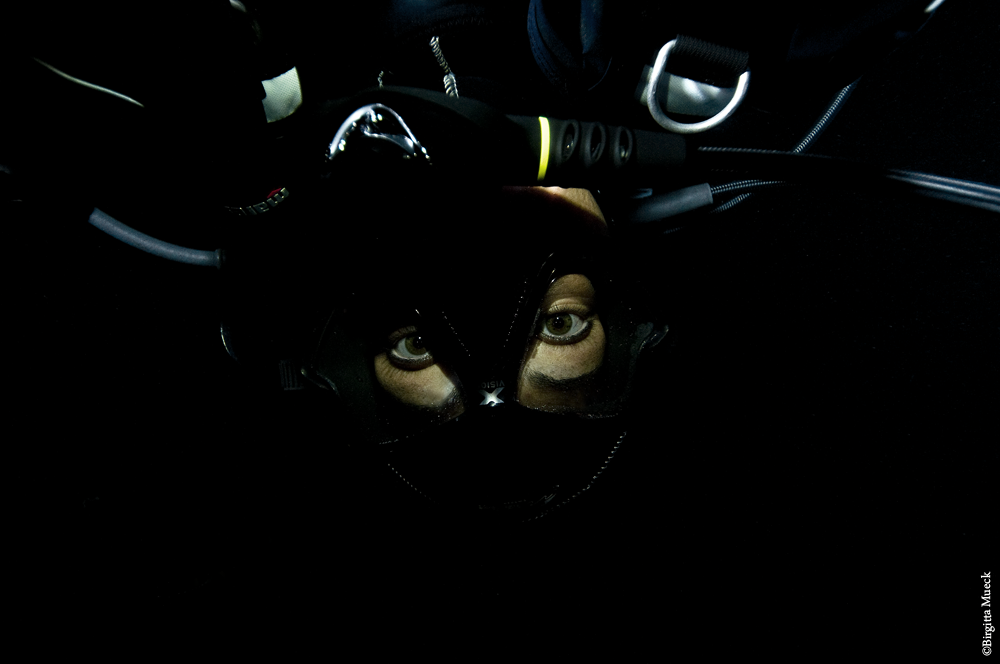 In the never ending darkness, the Lophelia reef slowly starts to appear in front of us...

Wow!! No matter how many times I already have been diving here I still get totally amazed by the fact that I´m diving next to a deep-water coral reef with corals that usually live on many 100 meters depth. 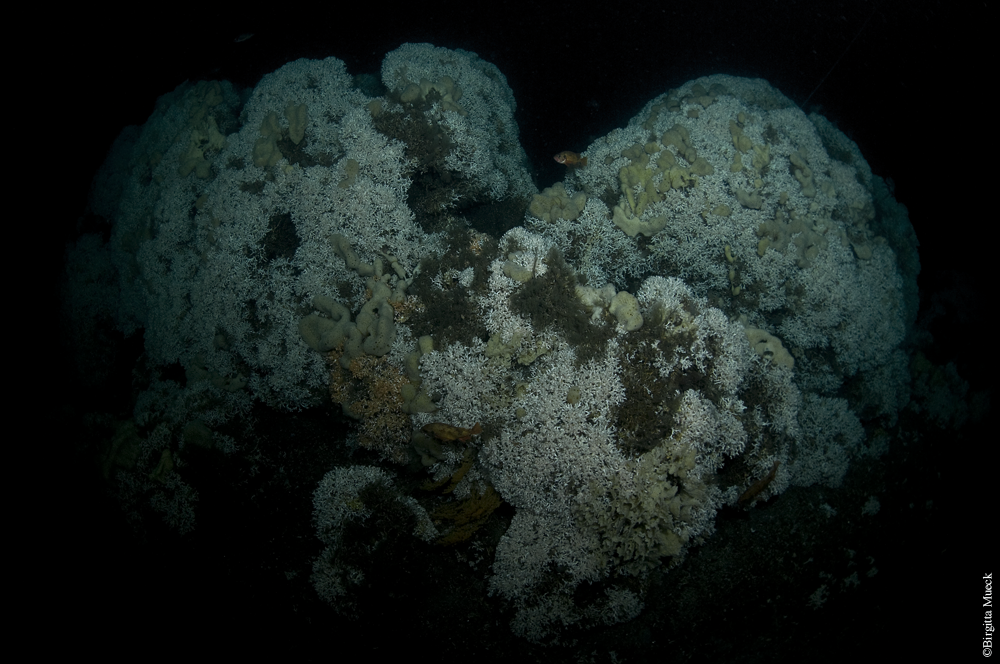 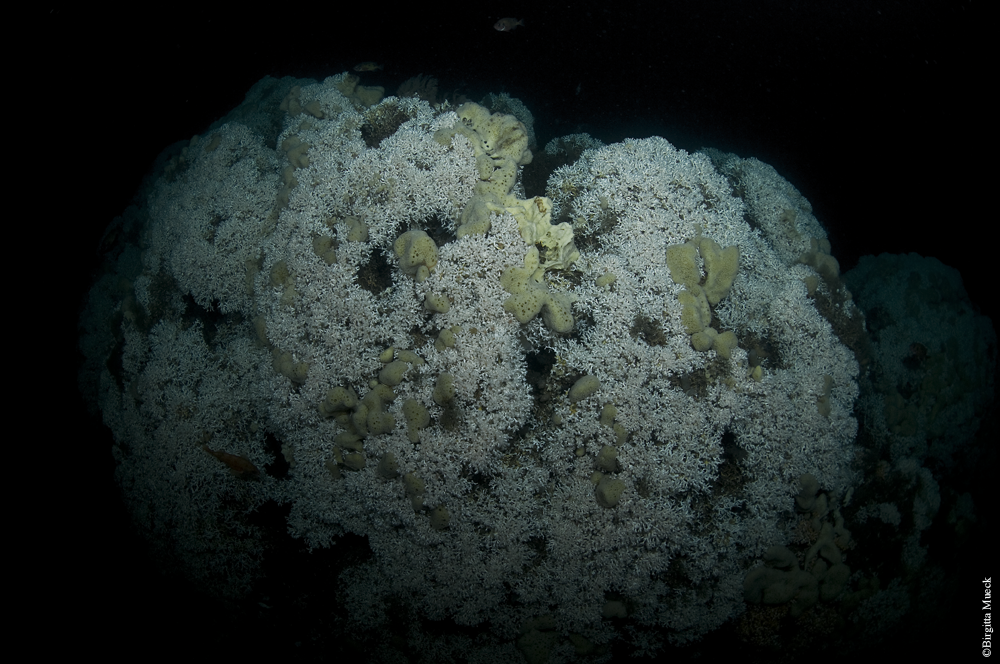 But when we get closer, we start to see that the reef has changed...

Last we dove here, in 2007 and 2008, the reef was a colorful scenario with big sea fans, amounts of basket stars and beautiful red bubblegum corals...

At first, I eagerly search for both the bubblegum coral and the big sea fans... But no, they're gone!!

Even the Lophelia reef is destroyed in many places. Fishing lines are entangled onto the coral reef, and the even bigger damage appears to be traces from anchors that have crushed the fragile corals.

It is a real sad sight to see such a unique habitat get so badly destroyed in just a few years... 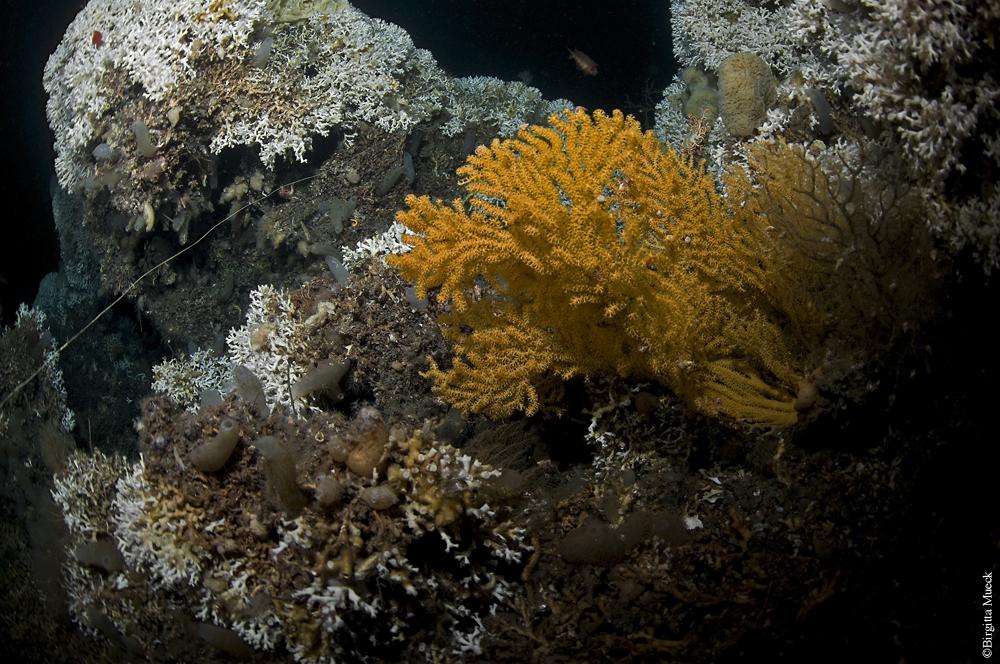 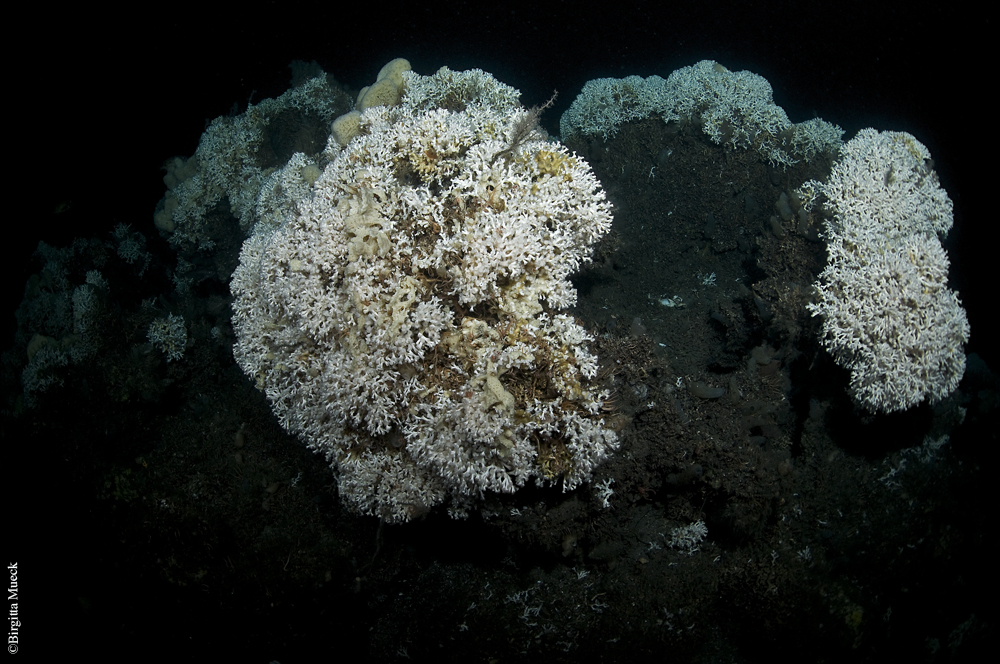 The largest recorded Lophelia reef measures 3 km × 35 km and lies at a depth of 300–400 meters off the Lofoten Islands in Norway.

Lophelia reefs are dated to an age of 8,700 years, but scientists believe that Lophelia pertusa reefs can be up to 10,000 years old... 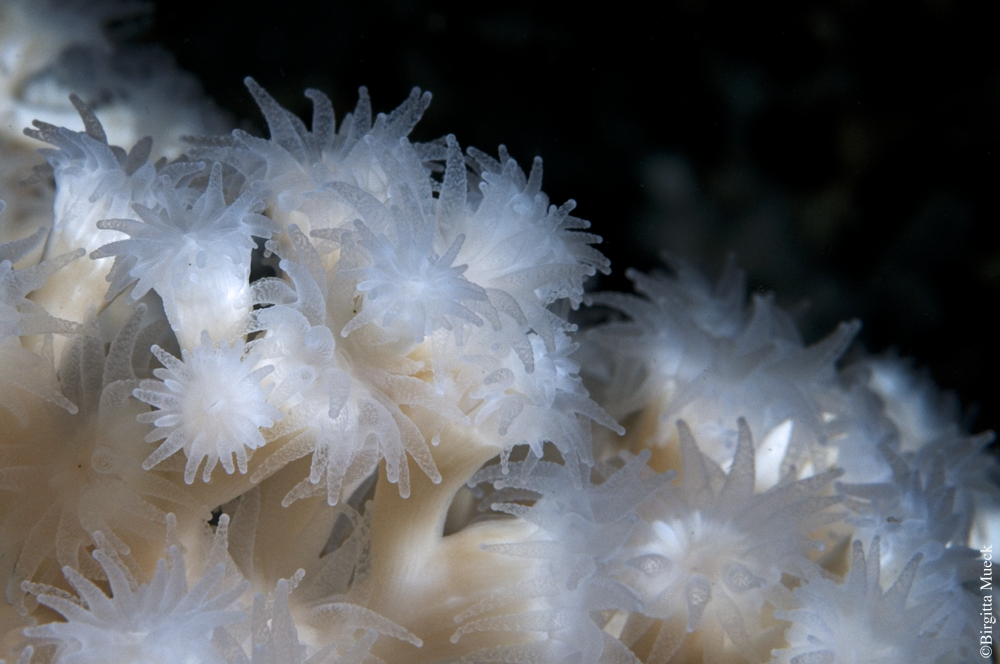 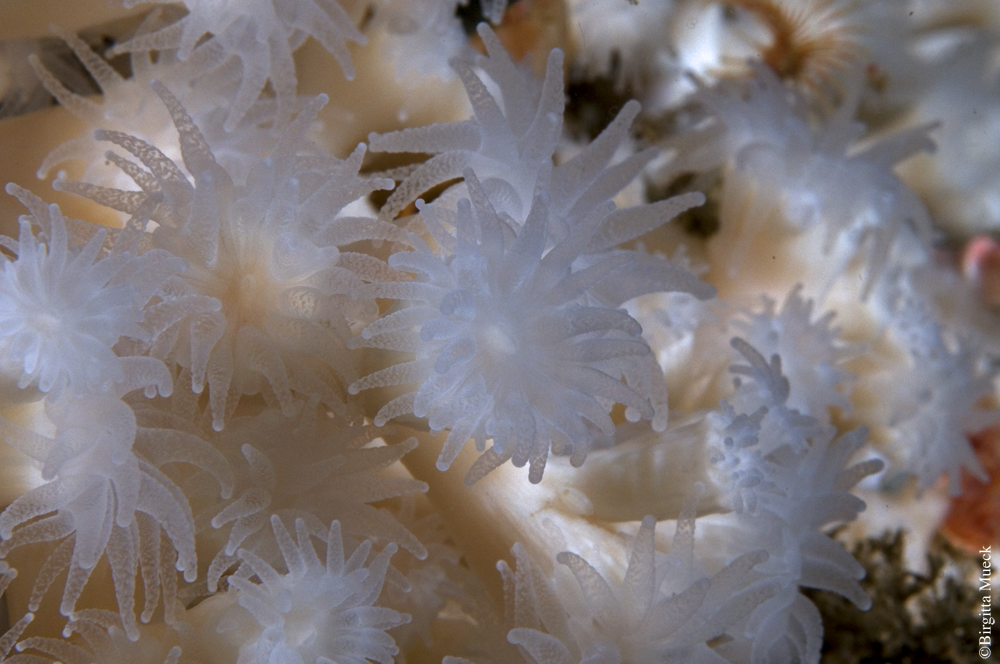 This coral spieces occurs in deep areas throughout the North Atlantic. Though there are also some observations made in the Indian Ocean and the Pacific.

Lophelia pertusa reefs are home to a diverse community. The total number of identified species on reefs in the Northeast Atlantic is set to over 1100.

As the species is extremely slow growing, they easily get harmed by fishing practices, or oil exploration and extraction.

In Swedish waters there are three known reefs, but two of them are already gone, a result from destructive bottom trawling... 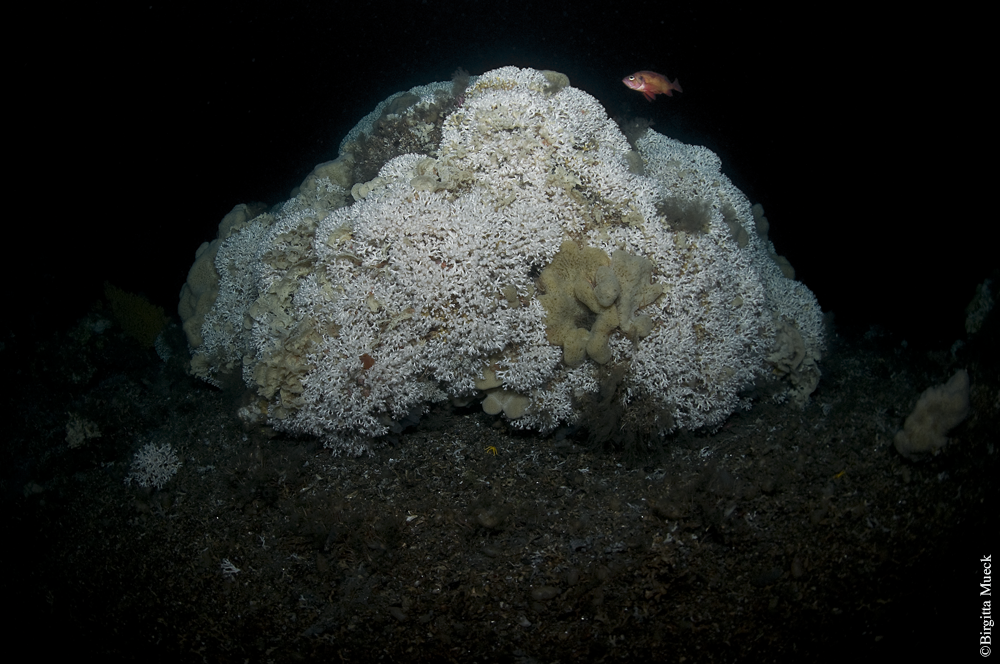 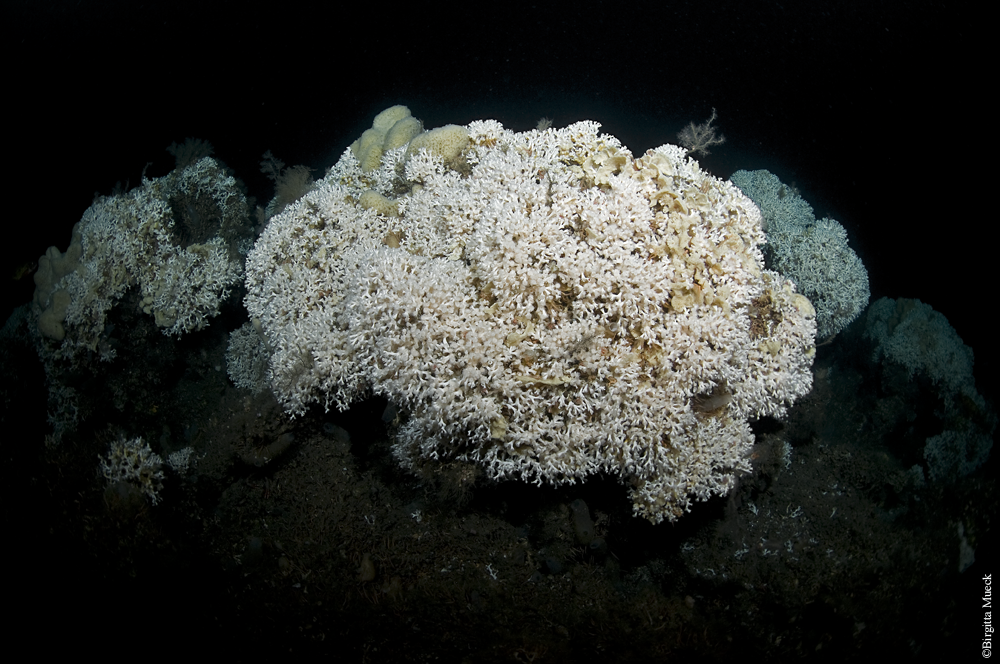 Such an amazing world there is hidden in our oceans, but so easily it gets ruined if we don´t take our responsibility to protect and preserve this habitat and its habitants.

This is what our new film project is about, how important it is to protect large areas in the ocean.

Currently, less than 1 percent of the world's oceans are closed to fishing... What efforts are actually made to protect the marine life living in our Scandinavian waters?

Our film project about "Marine Protected Areas" is a co-operation between Crystal Water Film Production and Swedish National Television (SVT). 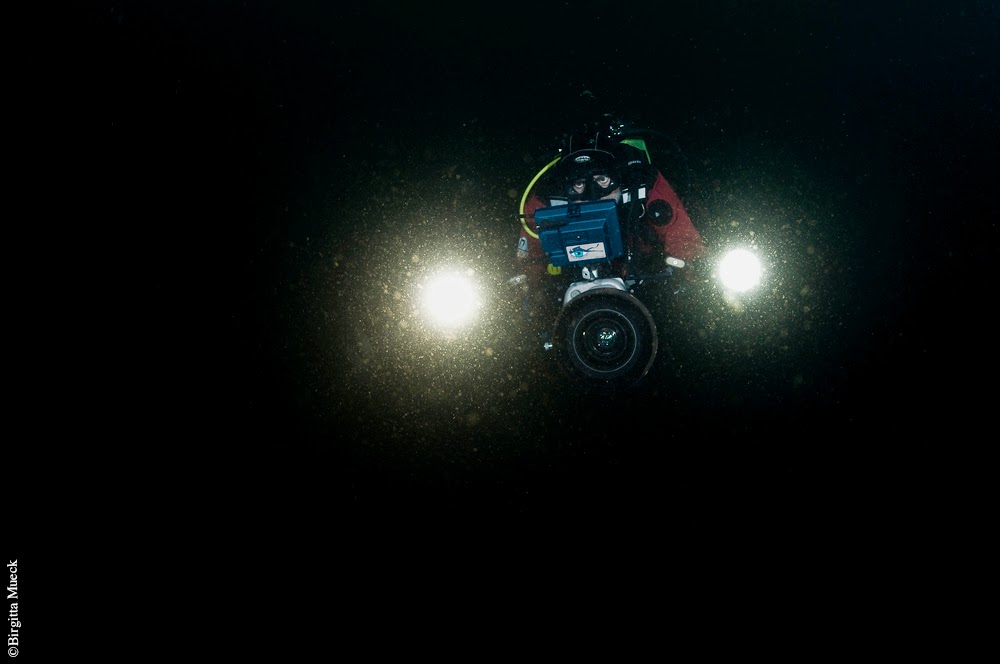 I feel a great admiration and deep respect when swimming next to the world's shallowest deep-water coral reef known. Such an unique place, a reef that has existed since way back and which is a home for 1000s of species ...

Like so many other localities along our coasts, this coral reef needs a much better protection to still be able to remain. Even if there already is damage done on the reef it is still not too late to protect and preserve what still there is.

For most of us, the underwater world is both an anonymous and a hidden place we don´t see. This makes it extra important for me to share my experience I get beneath surface...

A world we do not see will easily be forgotten... But no, it is there and it needs our attention and help! Together we can make a huge difference to help protect the life in our oceans. 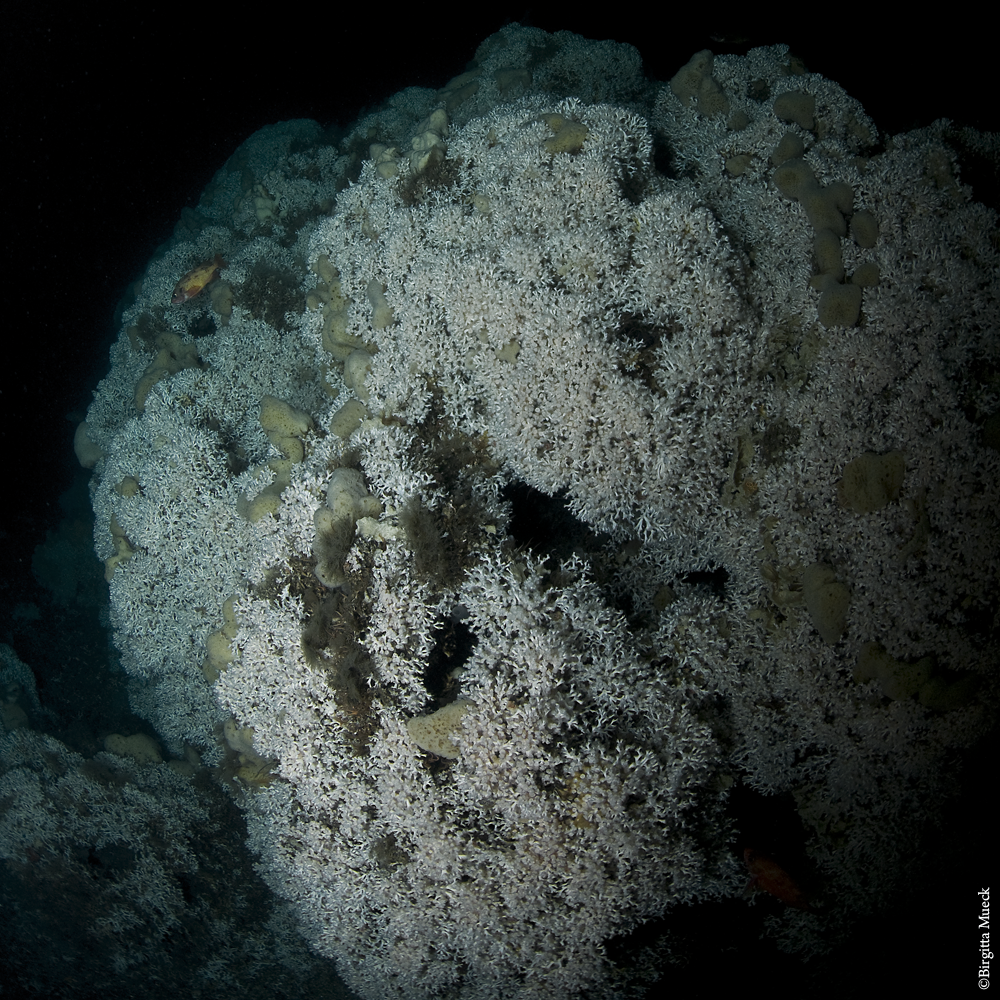 After one week of diving and filming in Sogndal, it is getting time for us to continue our trip further north.

We pack the car and are soon back on the road again... this time towards well-known regions... with other words we are heading back to Trøndelag! 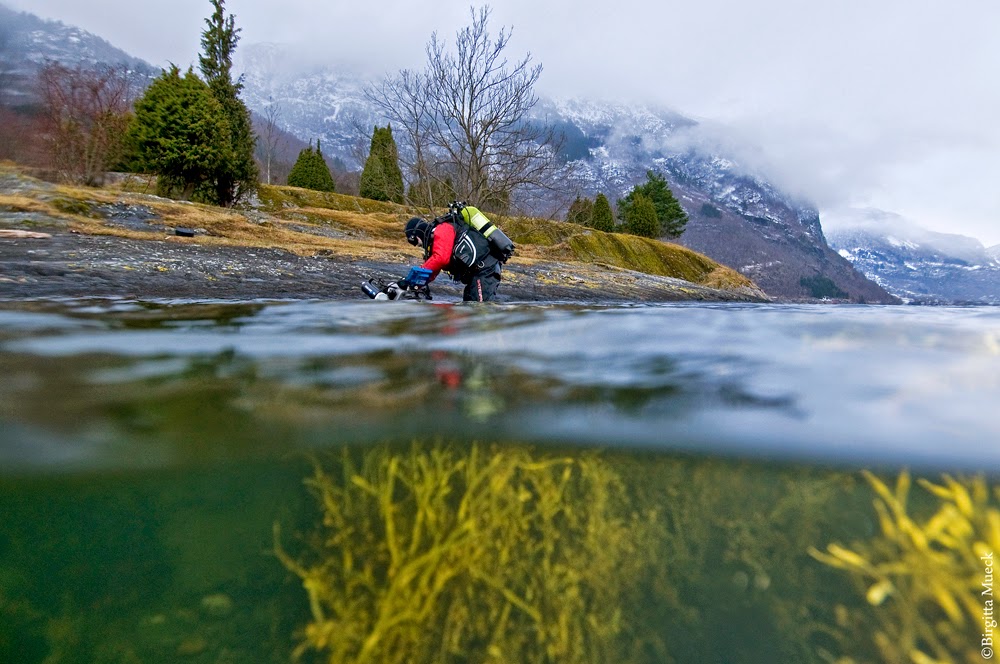 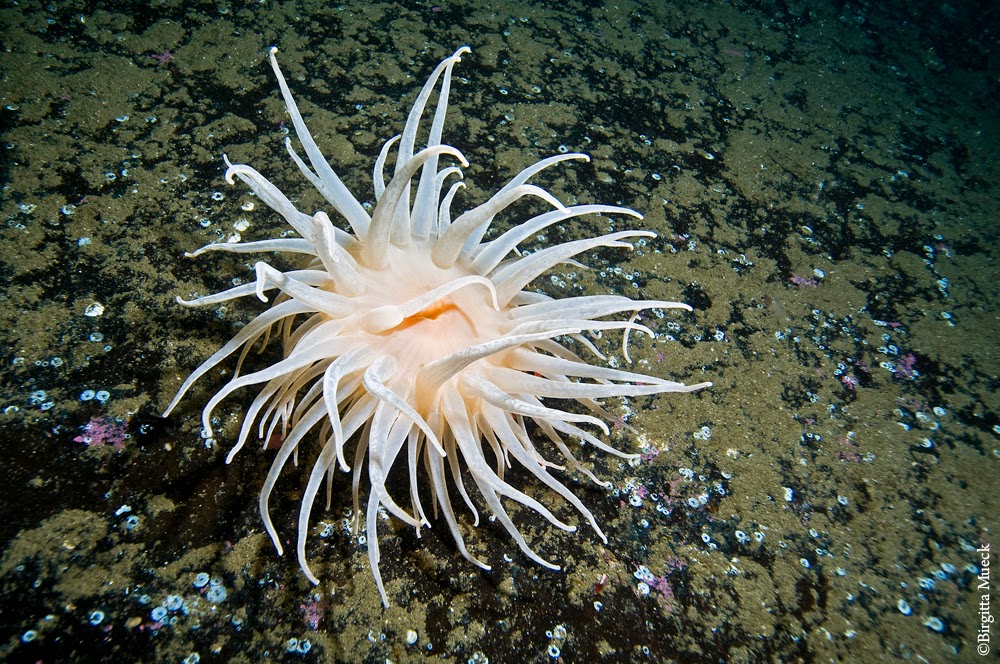 .
When arriving our destination, we really get the most beautiful welcome. Trondheimsfjord lies totally calm and the sun strongly smiles to us when taking the ferry over the fjord to Fosen Peninsula.

Spring time it is and I feel very happy to be back again! :-)

We are in the last weekend in March and it is time to change the watch to summer time.

Me and my ideas... ;-) ... This time I get the lovely idea of welcoming the summer and so I start to make myself ready for a dive... 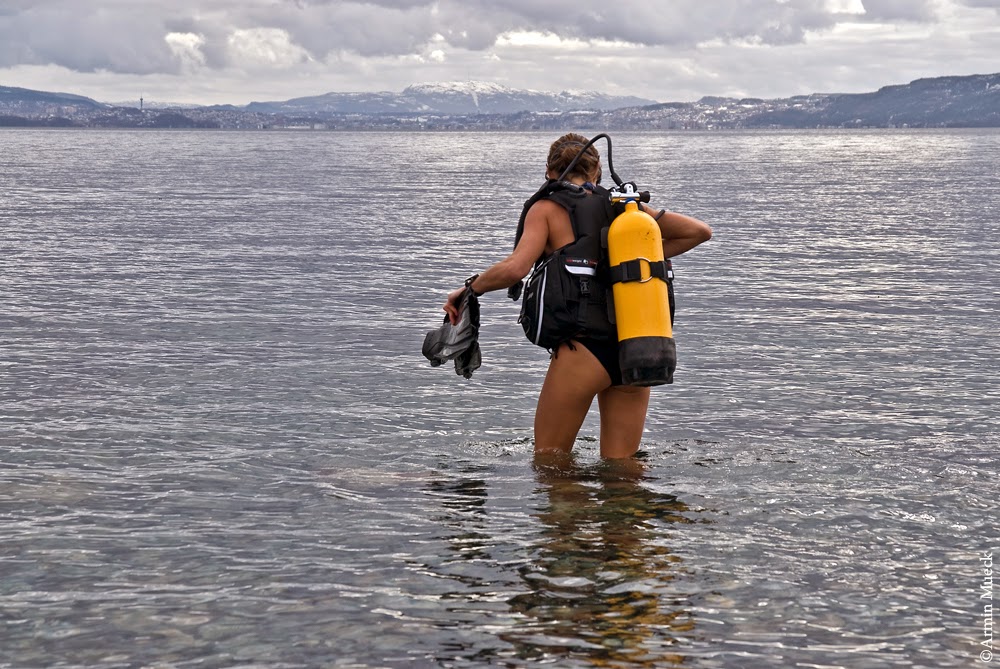 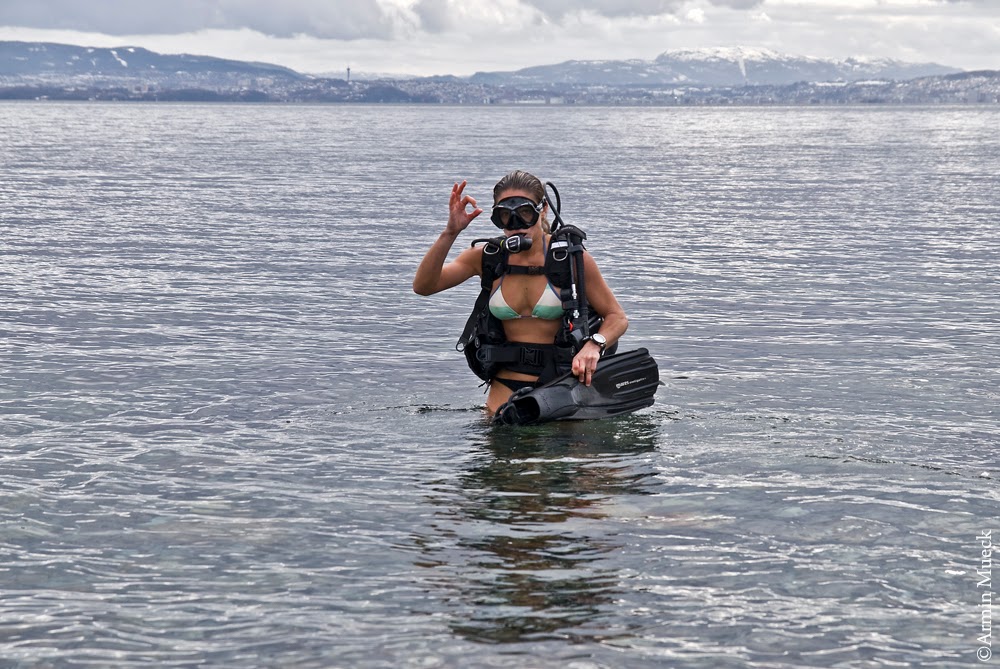 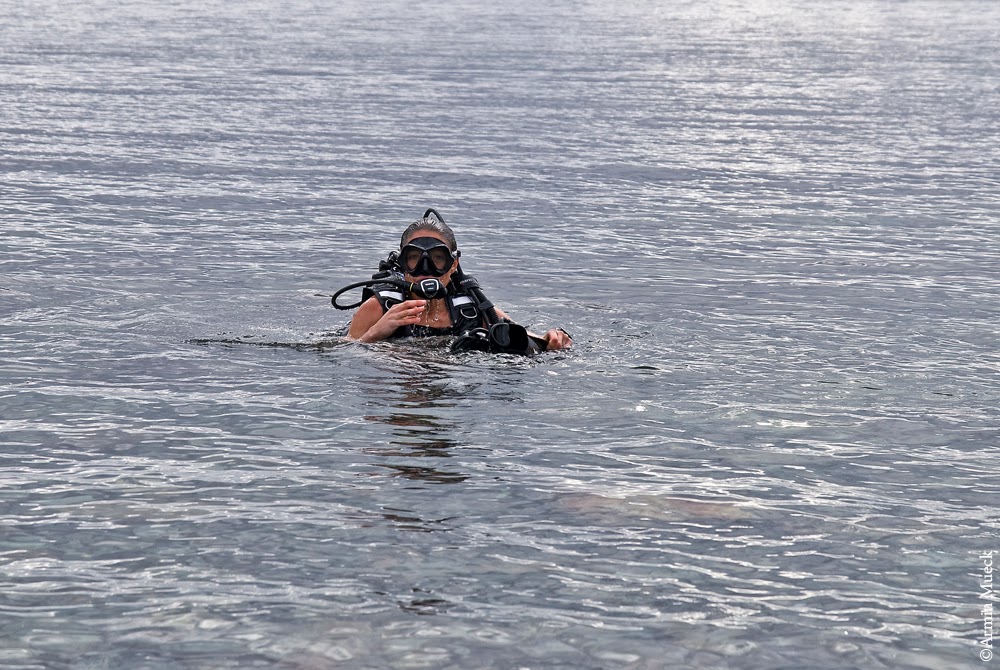 .
Indeed, it is cold to get into the 6°C cold water, but also very refreshing!! 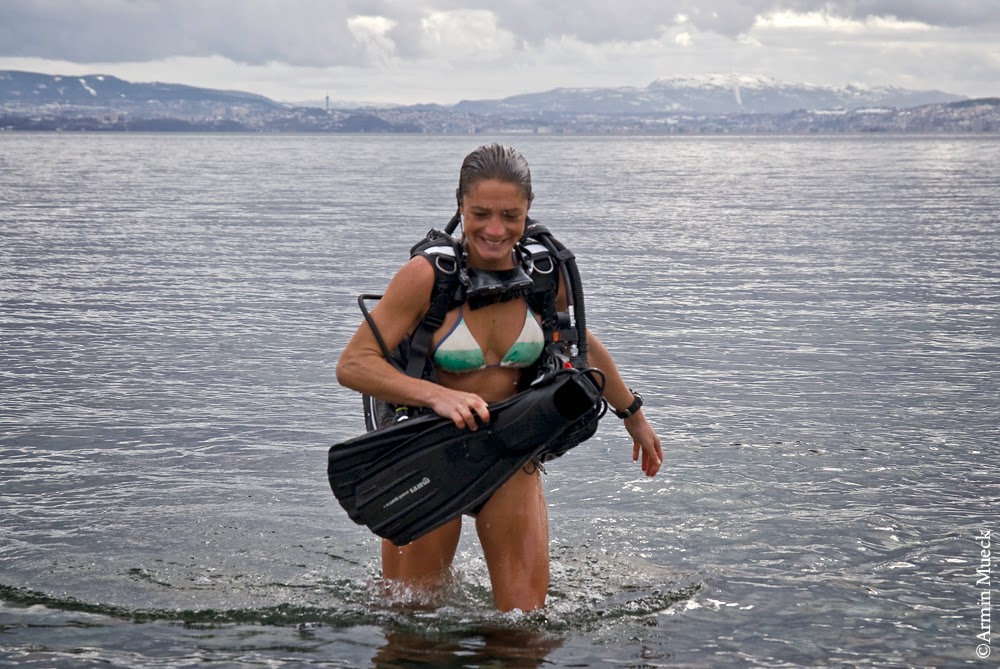 -Welcome summer, I eagerly look forward to what you have to offer! 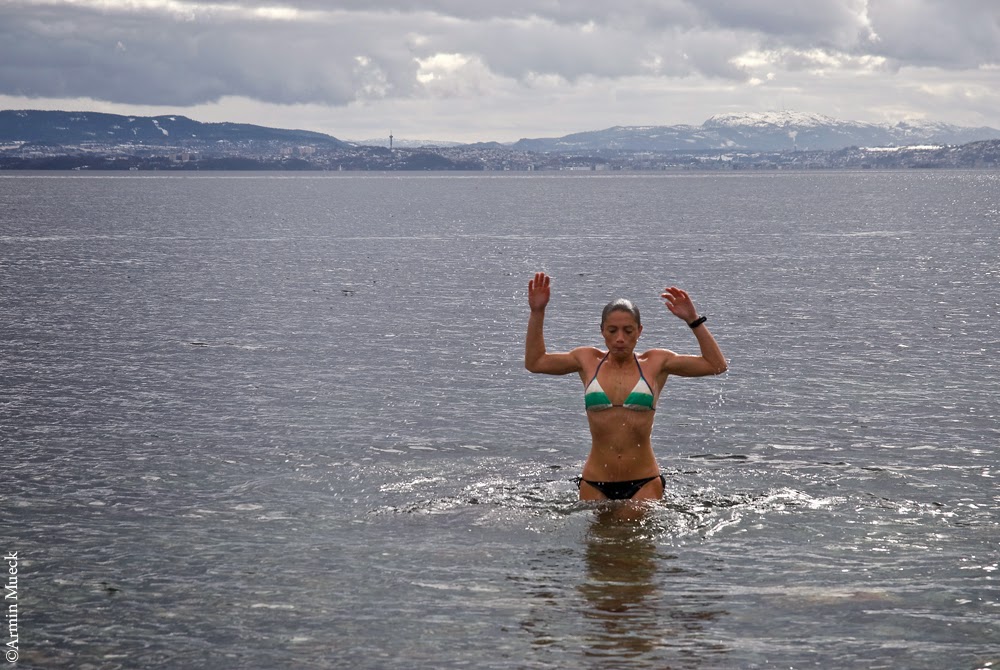 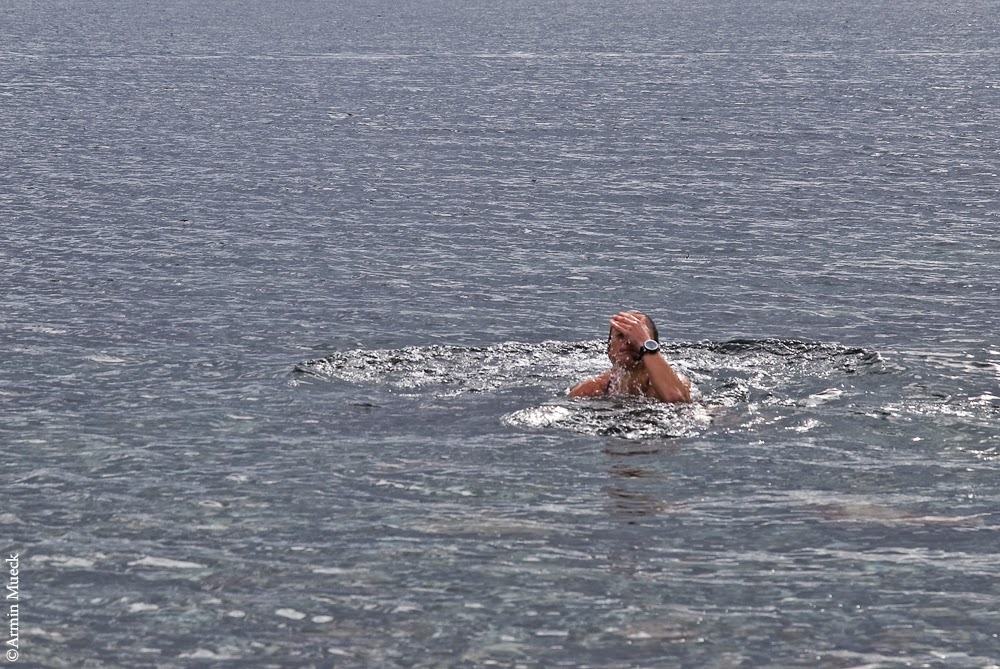 .
So, why are we now back in Trondheimsfjorden?

We are here to film deep-water corals. In fact, the shallowest cold-water coral reef known in the world is found here, in Trondheimsfjorden!

More about this and pics from our deep and cold dives on the blog soon... 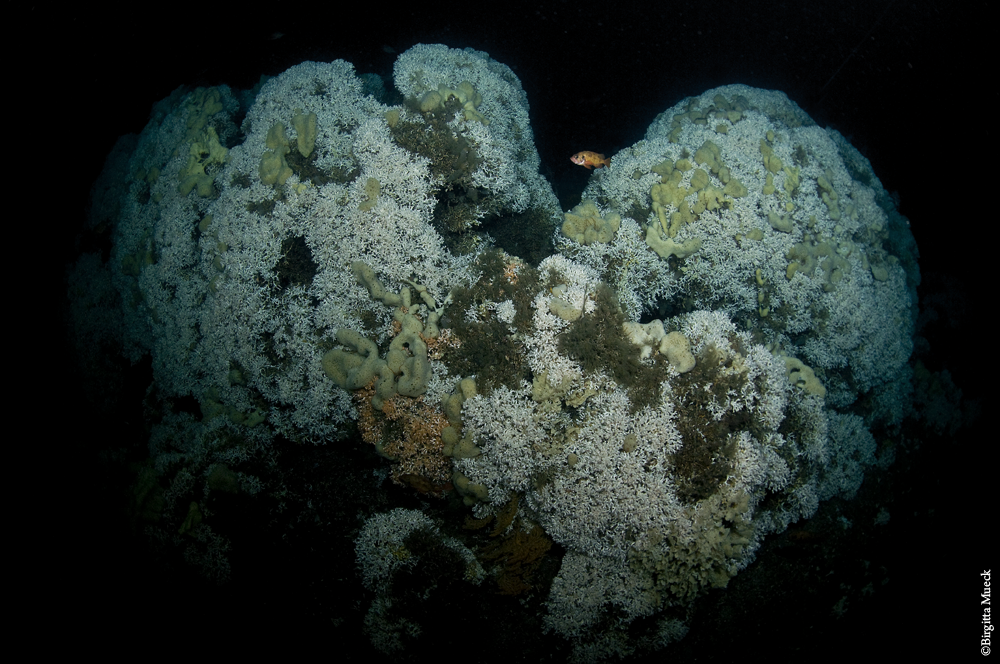